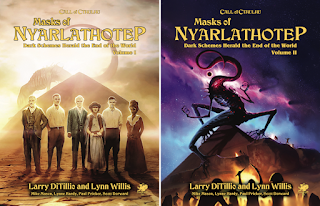 Today saw the release of the pdf version of Masks of the Nyarlathotep for 7th ed. Call of Cthulhu. I had planned to cover this once the hardcopy was released (in a few months time from now); but word on the street was that this was the good stuff, so I wanted to get in early on the action.

Originally written by Larry DiTillio and Lynn Willis, the classic campaign has been revised, rewritten and geneally overhaulec by Mike Mason, Lynne Hardy, Paul Fricker and Scott Dorwood, with the addition of new chapter functioning as a prologue to the campaign proper; it also includes the Australian chapter of the campaign (which, during first edition Call of Cthulhu, was published in a separate supplement). Not only is there a huge amount of extra content here, but the new edition of Masks of Nyarlathotep contains huge amounts of advice, guidance and additional background material to help in running the campaign, with lots of useful charts mapping the structure of various of its chapters. The pdf version also helpfully comes with a Keeper’s screen, and an 80 page document which consolidates a huge bunch of information useful to the Keeper.

If this weren’t enough, Masks of Nyarlatjotep is now presented in full colour, with entirely new art throughout, and maintaining the extremely high production values we’ve come to expect of the newly-revitalised Chaosium. The hardcopy - which will come as two volumes in a slipcase - is going to look gorgeous. For something which had already establshed itself early on as an rpg classic, Chaosium have gone and ratcheted-up this one to 11.